Price: $99.00
FRD04-AUX
Email this product to a friend
Ford Lincoln Mercury Auxiliary Interface Adapter FRD04-AUX
Introducing, our new redesign Ford aux input FRD04-AUX,   The FRD04-AUX it's an audio adapter for Ford  Radios with AUX button 04 and up Ford. F150 F250 Mustang aux input. The FRD04-AUX interface connects to the back of the Ford radio and converts the DVD port into an audio input port creating a new source, audio input aux for radios with Aux button it connects to the 16-pin connector that is located on the back of the Ford factory radio. This interface lets you input audio from any portable source like Mp3, DVD player, iPod/iPhone, satellite radio, or just about any external audio device by converting the Ford rear DVD plug on the factory radio into an auxiliary audio input. Anything can be added to the Ford radio without FM modulation this is not a wireless transmitter or FM modulator... That means the signal doesn't get degraded by the process of sending it to your ford radio. Radio must have an Aux button no sat button, works with single CD player or in dash 6 CD-changer AAI-FRD04 and frd04aux are the same part FRD04-AUX has a built-in audio adjustment gain control input of 0.475 volts to 4.75 volts (peak to peak) allowing you to match the audio level of the Aux device. Not compatible if your Ford radios comes with a Satellite button SAT
Fits all Ford vehicles in this list 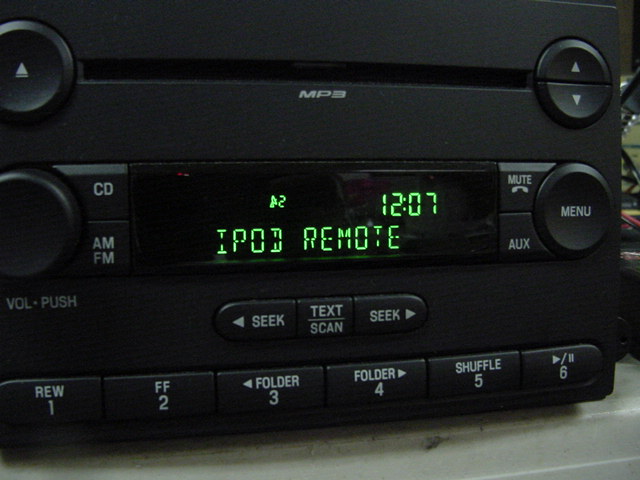 You can add an  iPhone docking connector,  select the cables from the bottom of this page, they work for iPod iPhone Android and most Smartphones
For tech support  contact us  1-407-9331065
Live Chat Software

After trying to use a FM transmitter for 6 months (with horrible results), I purchased the PIE FRD04-AUX And installed this device in my 05 GT Mustang It took me about 45 minutes to install, but only because I was very careful and i don't know anything about car stereos, I purchase this part from oemautosound because they answer the phones and the tech support. Sound quality is excellent - vastly superior to the terrible FM thingy I was using.
Was this comment helpful? yes no
(11 people found this comment helpful, 3 did not)
2. Travis on 1/8/2014, said:

Easy install in 06 Mustang This interface is great and allows you to use the factory Ford aux button finally no more transmitters . No more static, and better sound quality I highly recommend it.
Was this comment helpful? yes no
(9 people found this comment helpful, 2 did not)
3. Crystal on 1/1/2014, said:

thank you I can't believe you have this part available, I receive this frd04-aux in a few days and installation was simple it only took a few minutes, sound quality its great
Was this comment helpful? yes no
(12 people found this comment helpful, 1 did not)
4. Carl on 7/11/2013, said:

This interface is Great. Works exactly as advertized. Sounds great. The AUX button on the Ford factory stereo is now enabled (and shows "PIE" when selected). This is such an improvement from the old FM based input I was using to listen to my iPod. No comparison. I highly recommend it. ( copy from 4/11/2007 )
Was this comment helpful? yes no
(9 people found this comment helpful, 2 did not)
6. James on 7/11/2013, said: