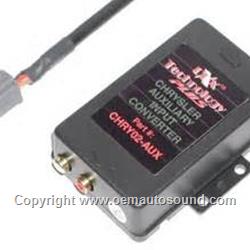 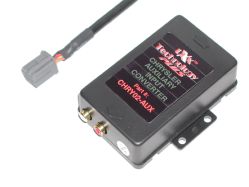 Notes: CHRY02-AUX,  Radio must have MODE or CDC button This aux interface is Not compatible if equipped with factory satellite radio.

Not compatible with  RAH “RBQ” (6-disc in-dash), and “RB4” (Navigation Radios), If equipped with factory satellite radio use the X2-CHRY02-aux This is the original black box chry02-aux with rca jacks not the Chinese small box single channel mono ( not stereo ) that you can find on ebay using our part number

I didn't believe the pie chry02-aux was available until I receive my box in the mail, This is a Great unit and easy to install with a little time. Took about 20 minutes including removing a previous add on from the factory radio on my Chrysler Town and country. Works great, it's just as advertised :) Thank you oemauto
Was this comment helpful? yes no
(2 people found this comment helpful, 1 did not)
2. Martin on 1/25/2014, said:

Fantastic product! Works exactly as advertised and sounds great! Who needs a cd changer when you have an iPhone? Now I have all of my content wherever I go! Music, Sirius Xm, Pandora...everything! Super easy to install,The install took less than 25 minutes in a Chrysler 300m
Was this comment helpful? yes no
(3 people found this comment helpful, 1 did not)
3. Travis on 1/8/2014, said:

I installed this interface in 2006 Jeep it took me 30 minutes using just a Phillips and flat head screwdriver. installation was simple the 10 pin jack connects to the back of the radio Led headphone cable out near the cigarette lighter. I can use with my iPod and Android phone, Sound quality is excellent vastly superior to the terrible FM transmitter I was using. My Chrysler dealer and local car stereo shop told me this couldn't be done $70.00 and 30 minutes and its done, now there is no need to replace the factory stereo
Was this comment helpful? yes no
(0 people found this comment helpful, 1 did not)
4. Ernesto on 7/11/2013, said: